Transport For Christ started in 1951 as the effort of a young Canadian, Rev. Jim Keys. He wanted to help truck drivers and build bridges of opportunity to talk to drivers about Jesus Christ. It didn’t take long for Jim to gather a team of men to travel by automobile throughout the Ontario province looking for drivers stopped along the Royal Canadian Highway and other routes. In time, a small modified step van that allowed drivers to visit inside was put into service. 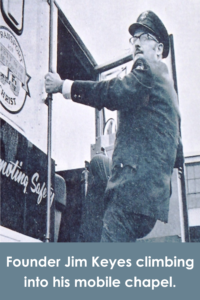 The opportunities to minister to truck drivers expanded with large trucking companies giving chaplains time to present safety meetings at the terminals. (The companies received better insurance rates when they offered safety instructions to the drivers.) The increased opportunities for ministry and the familiarity of trucks inspired the TFC leaders to use modified rigs to hold safety meetings and chapel services. The first mobile chapel was commissioned in 1968 with three added in the early 1970’s. 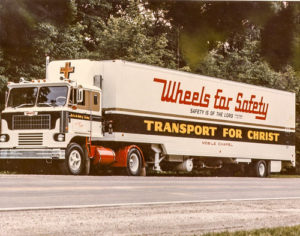 As cross-border drivers from the United States encountered these roving servants, they encouraged the ministry to spread south. Driver chaplains took one or two-week long tours of duty with these moving chapels crisscrossing North America. An average of 120 truck drivers came to faith in Christ each year.

Robert Thompson, a truck stop owner near Harrisburg, Pennsylvania persuaded TFC to park a chapel permanently at his plaza in 1986. At that location, 150 drivers professed faith in Christ the first year. This move changed the way TFC did ministry. Christ-following truck stop owners and others who observed the decline in prostitution and crime at the truck stops requested a chapel and a chaplain team. In time, up to 42 truck stop locations across Canada and the US had chapels or held worship and Bible study in driver’s lounge.

Early in the ministry (1957), Rev. Keys created a mimeographed handout about the ministry, called The Highway Evangelist. This paper grew into a newsprint magazine entitled, Highway News and Good News. The magazine includes features of interest to drivers, including photos of antique trucks, Christian life features, and driver health. Each month, nearly 16,000 magazines are distributed by chaplains at truck stops and many volunteers take them to trucking companies or businesses used by truck drivers.

Truck drivers operate in most countries in the world so it is no surprise that Christ-followers around the world have contacted TFC to explore developing ministry to truck drivers. TFC partners with national ministries in Russia, Zambia, Paraguay, Tanzania and Brazil.

In 2010, TFC launched Exit 58 to raise awareness with drivers to the injustice of  human trafficking. Based on Isaiah 58:6, TFC and its chaplains help drivers repent of pornography use and point them toward resources to break the addiction. In addition, TFC joined forces with Truckers Against Trafficking. Chaplains are regularly given training to watch for evidence of transporting men and women of all ages for labor and sex slavery. Chaplains also make drivers aware of the issue and instruct them where to report trafficking. TFC chaplains have been able to be a part of several rescues.

In 2019, we changed our name to TFC Global. We have always been about reaching commercial drivers with the Good News of Jesus Christ; this is not changing! The new name will allow us to expand our ministry to include several programs that will reach a greater community and provide a higher standard of care to drivers and those in the trucking industry. We have also extended our global reach to include a ministry in Paraguay, South America.

At 3.7 million drivers in North America, the opportunity for ministry is great. Today, we can see farther because we stand on the shoulders of giants of the faith.